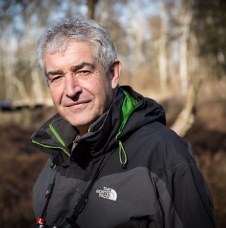 Before joining WWF in January 2018 Tony Juniper spent ten years working as an independent sustainability and environment advisor and writer, including as Special Advisor with the Prince of Wales's International Sustainability Unit and as co-founder of sustainability advisory group Robertsbridge.

He began his career as an ornithologist, working with Birdlife International. In 1990 he began a long period working at Friends of the Earth, initially leading the campaign for the tropical rainforests. After that, and following a period as Campaigns Director, he was from 2003-2008 the organisation's Executive Director. From 2000-2008 he was also Vice Chair of Friends of the Earth International. Among Friends of the Earth’s many achievements during Juniper’s time with the organisation was the success of the Big Ask campaign that called for a new law on climate change (leading to the 2008 Climate Change Act – the first legislation of its kind in the world).

On joining WWF, Tony remains a Fellow with the University of Cambridge Institute for Sustainability Leadership and President of the Wildlife Trusts. He was the first recipient of the Charles and Miriam Rothschild Conservation Medal (2009) and was awarded honorary Doctor of Science degrees from the Universities of Bristol and Plymouth (2013). In 2017 he was appointed Commander of the British Empire (CBE) for services to conservation.

Sarah Jane started her work with the Countryside Service of Surrey County Council. Following the ground-breaking transfer of the SCC Countryside Service to Surrey Wildlife Trust in May 2002 I transferred to SWT. Ten years later she manage the Biodiversity, Evidence & Policy department for the Trust where she oversees the planning advisory service, ecological consultancy, local record centre and Living Landscapes team as well as being involved in the development of Surrey Nature Partnership.

Gwyn has worked for RSPB since 1979 following contracts with the Nature Conservancy Council and Wildfowl & Wetlands Trust. He has undertaken a series of roles covering land use policy and practice, protected area conservation, species recovery and, during the last decade, land acquisition for nature reserves and nature reserve management. Since 2006, he has led the addition of over 20,000 ha to the RSPB’s estate of 152,000 ha.  During the last two years he has been leading the RSPB’s Conservation Investment Programme, to explore and develop proposals for the use of debt and equity finance in delivering RSPB objectives, in which we have received generous support from many partners but especially Environmental Finance, Triodos, Oliver Wyman, and the Esmée Fairbairn Foundation.

What does natural capital investment mean for business models in the private sector?

Mat Roberts, is a corporate sustainability leader with 30 years experience of leading change across multiple sectors.  His current focus is advising leadership teams on how to achieve more, go faster and great greater value through embedding sustainability in corporate strategy.  Previous roles have included Group Sustainability Strategy Director at Interserve PLC, Head of Sustainability at Landmarc Support Service.  In the public sector he served as Superintendent of Epping Forest for the City of London and helped the Scottish Government establish its first National Park in Loch Lomond and The Trossachs.  Mat created the popular annual Social Value Summit to drive social change across every sector. He is a Trustee of The Princes Countryside Fund, The National Association of AONBs and Cynnal Cymru (Sustain Wales). He is an advisor to the Cabinet Office on Social Value and the EU’s Business and Biodiversity Platform.  Mat is a founding member of the Global Association of Corporate Sustainability Officers.

Nick leads the work of the Aldersgate Group; an alliance of major businesses, academic institutions and civil society organisations that drives action for a sustainable economy. He has been the lead author of Aldersgate Group reports, including some of the Group’s previous report and briefings on natural capital and is a regular commentator on sustainability issues. He was most recently Head of Climate Change and Energy Policy at WWF-UK following a career as an environmental and energy lawyer at CMS Cameron McKenna, where he spent six years working on environmental and commercial energy law for a range of international businesses, regulators and governments. A regular public speaker, Nick also writes for a range of outlets such as The Economist Insights, Business Green, Euractiv and the Huffington Post.

Phil graduated in Civil and Structural Engineering from Nottingham Trent University. From there Phil joined Balfour Beatty and developed his managerial and then leadership skills.  Phil has led complex major civil engineering projects including the construction of the tunnels at Hindhead on the A3 and is now responsible for Balfour Beatty's Highways business leading a workforce of over 2,000 people. Phil is a collaborative leader and his extensive experience has enabled him to provide the highest standard of customer service and deliver operational excellence on highways schemes across the whole of the UK. Safety is Phil’s number one priority and his vision is to care for his people in a way that makes them feel included, whilst offering a sustainable future for them, his customers and those communities that are touched by his work.

Gudrun Cartwright is a strong advocate for the ability of business leadership to drive positive change for people and planet.  Gudrun leads BITC’s Environment programme focused on ‘smart growth’ - creating prosperity and opportunity through a rapid transition to a resilient, net zero carbon, circular economy that restores the health of water, land and biodiversity in urban and rural areas.  Gudrun is passionate about developing collaborative, cross sector projects that deliver a step change at a system level and has established water and circular economy taskforces to enable this work.  Prior to working at BITC, she worked in the NHS, manufacturing, logistics and retail, supporting innovation and change to improve quality, productivity and customer experiences.