The human and economic costs of flooding have been particularly obvious in recent years across the UK.  BESS research has contributed to greater understanding around natural flood management in two ways:

Highlights of research findings and tools from the BESS programme

[Numbers in brackets are links to research papers] 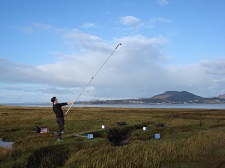 With sea levels rising and storminess expected to increase, the management and restoration of coastal ecosystems such as saltmarshes and mudflats will become an increasingly important component of flood prevention for low-lying coastal communities. BESS researchers recorded water heights along 45 km of Norfolk coastline during the storm surge event of 5-6 December 2013 [1,2,3].  There was considerable variation in maximum water heights and impacts between different local areas, influenced by the presence of mudflats and marshes.  Regional forecasts of storm surges could be improved by including the local effects of the particular coastal setting and the extent of coastal ecosystems.

Both above-ground vegetation and plant roots shelter coastal soil from waves and rain, physically bind the soil together and also support microbes that stabilise soils.  Researchers from CBESS found that saltmarsh plants vary in how well they stabilise soil and that more diverse plant communities with their greater root biomass offer better resistance to erosion [4].  Having high plant biodiversity is likely to be most important in coastal areas with more sandy soils as these are more prone to erosion. 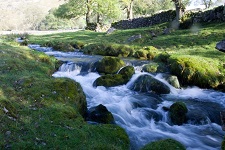 River restoration not only reduces flood risk, but also potentially generates a broader range of benefits. For instance, planting strips of shading woodland next to streams is one way of mitigating rising temperature impacts. Researchers at the DURESS consortium have shown that planting native deciduous woodland in buffers (> 60 m) wider than commonly used for shading alone can also increase stream productivity, possibly enhancing resilience [5].  Streams draining from deciduous woodland had more particles of leaf litter and so a greater density of macroinvetebrates [5].  The impacts of climate change on streams could also be mitigated by reducing river pollution and improving water oxygenation [6].  A 'Killer Facts' document, compiled by Alastair Driver when he was National Biodiversity Manager at the Environment Agency, contains many examples of the multiple benefits to be gained from river and wetland restoration, gathered from projects around the UK.