Human wellbeing depends on maintaining ecosystem functions and services in the face of increasing environmental change.  Ecological resilience is increasingly a policy goal, with a need to apply ecological concepts relating to resilience to environmental management.  Yet there is discussion about how to define and measure resilience, with evidence about resilience strongly lagging behind theory.  BESS research contributed in three areas: 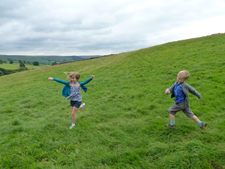 Given the multiple pressures on ecosystems and the need to adapt to environmental change, aiming for ‘resilient’ landscapes is an appealing vision.  The term resilience has become a ‘boundary object’: a concept with slightly different uses and interpretations by different communities (see this blog post).  Boundary objects have benefits of bringing people together from different disciplines, as long as there is awareness of the potential for misunderstanding.  Resilience may be used to refer to particular properties of ecosystems, in a more general sense to communicate a goal or in relation to human capital (such as conservation partnerships and local communities) involved in the flow of ecosystem services.  A BESS workshop highlighted the multiple definitions used, but that resilience essentially encompasses three related elements:

Others consider resistance to be a separate quality to resilience [4].  Theory on ecological resilience suggests that gradual environmental changes and pressures might be having little apparent impact on an ecosystem, until a sudden disturbance such as disease tips the ecosystem into a different set of reinforcing processes.  This can lead to a ‘regime shift’ with a change in the assemblage of species providing ecosystem functions.  This ‘alternative stable state’ might be less favourable in contributing to the ecosystem services needed for societal wellbeing.  Management interventions to return the ecosystem to its previous state might then be more costly than prevention or impossible.

Relatively low levels of biodiversity may be sufficient to provide a range of ecosystem services under current environmental conditions [2].  However, the rate and intensity of environmental change is increasing, with future conditions likely to be very different [2].  If species important for underpinning particular services are lost or decline because of environmental change, this could result in sudden declines in ecosystem services [2].  However, if there are multiple species which perform a similar function, but with different responses to environmental changes, then the dominant species performing a particular function could switch.  This is often described as the ‘insurance effect’ provided by biodiversity.

Wessex BESS researchers found that having plant species with varying traits increases the resistance of chalk grassland to drought and aids recovery.  These functional traits of plants are characteristics that influence their surroundings and impact on the ability of the system to deliver ecosystem services.

Dieback in the New Forest 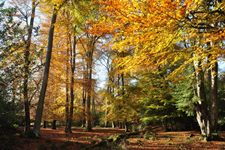 Forest dieback is occurring globally and is ongoing in the New Forest.  Research found that some areas of the New Forest dominated by beech in 1964 had become relatively open grassland by 2014 [5].  The high death rates of large beech and oak trees were associated with changes in other tree species, changes in the plant species at ground level and an increase in grass cover.  Importantly, these changes associated with tree death occurred relatively abruptly.  Only in areas where more than around 40% of the basal area of trees were lost did the composition of other species change and grass cover increase.  These threshold responses occur when there is positive feedback, but they can be difficult to detect without long term monitoring.  Likely causes of beech dieback include droughts combined with attack from pathogenic fungi.  Regeneration from seedlings is then prevented by pony and deer grazing.  Beech makes up a large proportion of canopy cover in the native woodlands of southern UK and has a low tolerance for drought, so these UK forests may have low resilience to climate change.

Awareness of the multiple uses and definitions of the term 'resilience'

For example, ‘flood resilience’ encompasses many aspects of a local community, while ecological resilience considers the ecosystems providing flood regulation services.  CBESS and other BESS research highlights how saltmarsh and mudflats have a direct role in natural flood management and an indirect role through the regulation of greenhouse gases.

Understanding trade-offs between different services and for different groups of people.  Scenario setting, such as the DURESS scenarios for upland Wales, can highlight the range of drivers involved and societal choices. There might be trade-offs between managing for short term ecosystem functions and for long term resilience [3].

Making choices about the level and type of intervention

Factors include what is desired by people and what is appropriate for the landscape and resources available.  For example, one response to beech forest dieback could be to protect seedlings from grazing [5].  An alternative option would be to view the New Forest as adapting to changing conditions, although this would involve accepting reductions or changes in some ecosystem services.

Meeting other needs and goals

Actions intended to increase resilience can meet other needs and goals as part of the Ecosystem Approach [4].  There is evidence that increasing connectivity in forest landscapes and freshwater shallow lake systems increases resilience.  Interventions that modify functional connectivity for one species can affect different species and processes in different ways (see the Landscape Institute Technical Note on Connectivity and Ecological Networks).  Planting wide buffers of deciduous woodland alongside upland streams can potentially increase resilience and provide other benefits [6].

Influence of other actions

There is a need to develop robust cost-effective indicators linked to the mechanisms underpinning resilience [3] [4].